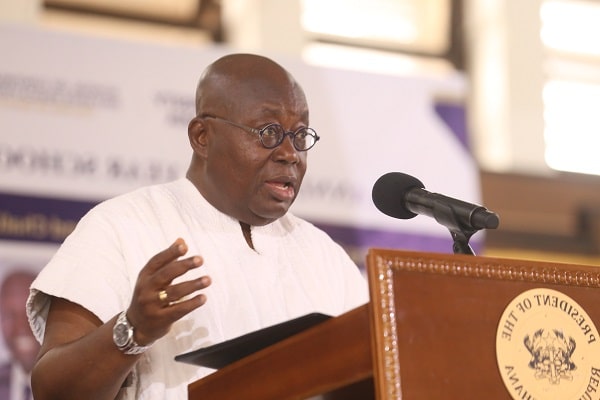 President Nana Addo Dankwa Akufo-Addo has stated that the Ghana Beyond Aid status is achievable and urged Ghanaians to put their shoulders to the wheel as the country strives to define and craft its own destiny.

“It is not a pie in the sky notion because other countries, including our peers at independence, have done exactly that. It is doable and we must believe that what others with less resources have done, we can do,” he urged Ghanaians.

President Akufo-Addo stated this when he opened the 71st Annual New Year School and Conference organised by the School of Continuing and Distance Education of the University of Ghana in Accra on Tuesday, January 14.

The three-day programme is on the theme: “Attaining Ghana Beyond Aid: prospects and challenges”.

The President noted that for starters, Ghanaians had to do things differently to realise the goal and also acknowledge the fact that it could not be achieved overnight, noting that, indeed, the most rapid cases of economic and social transformation in history, those in South East Asia, generally took 30 years.

“We need to do better than that, as we have already wasted enough time. To get to a Ghana Beyond Aid, we have to harness our own resources and deploy them creatively and effectively for rapid economic and social transformation,” he added.

He said that required the “breaking away from the mindset of dependency and manifesting a can-do spirit fuelled by love for our dear country, Ghana. We cannot subordinate the common good to build a prosperous nation to the selfish interests of a few”.

Explaining, he said even though under-achievement might have been part of the country’s history so far, it should no longer be part of its destiny.

He noted that achieving the destiny required a deliberate qualitative change in all aspects of Ghanaian life, especially in the structure of the economy, the nature of infrastructure, the education of young people and the acquisition of skills and, above all, in attitude and also holding firm to the values that defined Ghanaians.

President Akufo-Addo stated that Ghana was endowed with many natural resources but its state did not correspond with the endowments, adding that poverty, mismanagement, corruption and high fiscal deficits had been the hallmark of the economy, which had been financed through borrowing and foreign aid.

To address the challenges, he said, his government was pursuing a different path to prosperity and self-respect for our nation.

The President said moving Ghana Beyond Aid required protecting the environment for the future of Ghanaians, especially halting all activities that negatively affected the health environment, depleted the forest and destroyed the water bodies.

He said the government had commenced concrete steps towards restoring micro-economic stability and economic growth, saying that after three years of discipline and prudent economic management, it had reversed almost all the bleak indices it inherited.

He said Ghana’s trade balance account, for the first time in more than a decade, started recording surpluses in 2017 and had been maintained and would do same this year, while fiscal deficit had been brought down from 9.3 per cent in 2016 to 4.5 per cent currently.

Touching on corruption, which he described as the “stealing of public funds”, the President called on all Ghanaians to police one another’s behaviour and report acts of corruption within their purview, so that the evil did not thrive.

He said, as an example, every single allegation of corruption made against any of his appointees had been referred to the state-mandated independent bodies, such as the Commission on Human Rights and Administrative Justice (CHRAJ), the Criminal Investigation Department (CID) of the Police Service and, in some cases, Parliament.

The Vice-Chancellor of the University of Ghana, Professor Ebenezer Oduro Owusu, said the annual New Year School and Conference provided a platform for Ghanaians of all walks of life to contribute to the discussion on pertinent issues of the economy.

He said the Ghana Beyond Aid agenda had serious implications for how the nation managed its assets and prepared for the future.

It also had a cardinal bearing on the kind of legacies the current generation would leave behind as today’s leaders for the benefit of the future generation, he added.

Prof. Owusu said as a university charged with the responsibility of training critical minds and producing world-class leaders, it was mindful that it should set the pace for the attainment of the Ghana Beyond Aid agenda.

NATO leaders appear to share a laugh over ‘jaw-dropping’ Trump

How the Irish sport of hurling came to the US

Lighthouse moved 70m to save it from the sea

Varadkar: EU will have upper hand in trade talks

‘We Will Do Everything Legally Possible To Win 2020 Elections’ –...